In this trick, David and Leeman came up with what they call pressure phrenology – they can make people unable to do certain things by putting pressure on their skull. They demonstrate this magical technique by making Howie Mandel unable to read.

After some fun jokes, Leeman starts the trick by pressing on the part of Howie's skull which will make him unable to read. David then presents three cards with different words written on them. He first shows each card to the audience and the judges, and they are clearly able to read and understand the words.

But when he shows the same cards to Howie, he is unable to read them. All that comes out of his mouth is incoherent mumbling!

Leeman then releases his pressure on Howie's head, making him able to read again. He is shown the cards again, and this time, he can read them without a problem!

It looks like David and Leeman really took away his ability to read just by applying some pressure to his skull. Magic!

But did they really? As always, we are skeptical. See the video of the trick and then read the explanation below.

Of course it is impossible to make people unable to read just by squeezing their skull. But then how did they do it?

The secret lies in a simple but fascinating optical illusion. David and Leeman used what is called »hybrid images«. Hybrid images are images which look one way from up close, but another way if you look at them from a distance. For example, take a look at the image below: 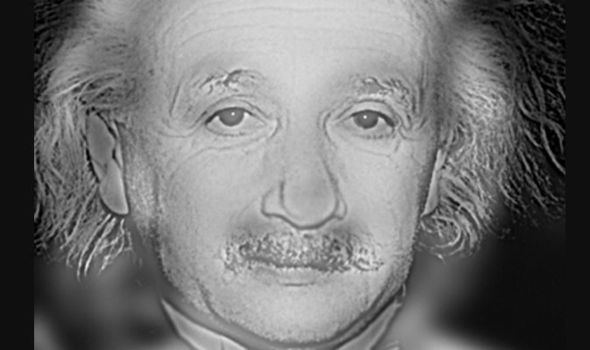 What do you see? Probably Albert Einstein. But step back and look at this same image from some distance. Suddenly, Einstein is gone and you are looking at Marilyn Monroe!

We won't go into a detailed explanation of how exactly hybrid images work. What you need to know is that this is exactly the same optical illusion David and Leeman used in this trick. When they show the hybrid image to the audience, the judges and the cameras, they all see normal words like »Comedian«, »Germaphobe« and »Howie Mandel«. But when Howie looks at those same cards, he is so close to them that he is looking at totally different words. When you look at them up close, there are probably just random letters on the cards, so when Howie tries to read them, he just ends up making silly sounds, creating an illusion that he really isn't able to read anymore.

But then how is he able to read them after Leeman releases the pressure on his skull?

Well, it's really pretty simple. The second time, he is shown different cards. David has six cards in his hand. Three have hybrid images on them, and the other three are just normal cards with words.

In the end, David tears the cards and throws them to the floor so they cannot be further inspected. The trick is finished.

We have 451 guests and no members online